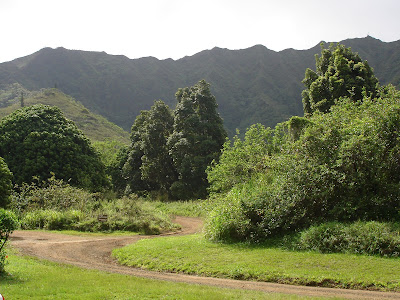 Today we traveled to the island of Kaua'i.

Last night we had a late evening taking care of packing, SCUBA stuff, driving to LA, visiting our parents, and finally settling in at Steve's mom's house. We woke up very early for our flight out of LAX. We met Tuti & Marcello at the airport.

We were all excited!

After a 5-6 hour plane trip we landed in Honolulu, Oahu. We were able to take an earlier flight out to Lihue, Kauai (which was better so we could settle in). We had intended to stay on Oahu for about 5 hours to visit Pearl Harbor or Waikiki - but we were just going to go there on our layover back to LA.

As we're descending on Lihue - we looked outside of airplane windows and we were in such awe. Kauai was so green and beautiful. It wasn't so busy and congested like Oahu. We all knew that we were in for a blessed & wonderful vacation.

We got our rental car - instead of a Toyota Corolla we get some other car (i forgot the name). It was bigger at the same price (the car company didn't have the corollas).

Next on our agenda was to drive to Kahili Mountain Park where we'd be staying. Located on the property also was Kahili Adventist School- it is "nestled at the base of the majestic Kahili mountain on 197 acres of land." 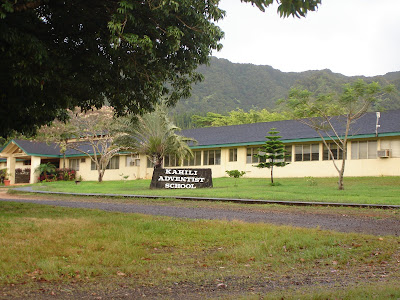 Our beautiful cabin was the largest one there - a 2 bedroom, 2 bath, with a living room, dining area, full kitchen, and a porch that overlooked a lovely backyard. (the price per night was such a bargain as well!!) 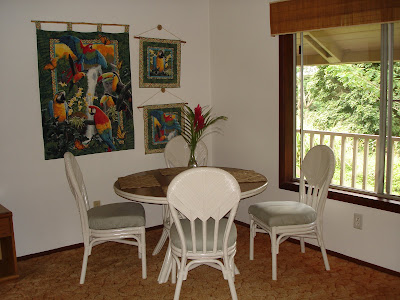 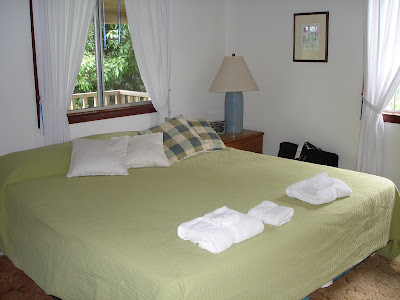 Driving up to Kahili reminded us so much of the Philippines. There were dirt roads with greenery all around us. It was a quiet and peaceful area. After we unpacked and settled the boys (Steve & Marcello) found some enjoyment in trying to knock down some coconuts. While watching them, Shy was attacked by mosquitoes!! - 2 bites in one shot. I was so scared that I would be miserable the whole trip. During my senior trip to Oahu I had about 7 mosquito bites that swelled so much! But I put Katinko on the bites right away and made sure not to scratch them. (fortunately those were the only bites I got the whole trip). Well we watched the guys get the coconuts some more and they were actually successful each with one coconut! The juice was so yummy & sweet. However, there wasn't much coconut meat. 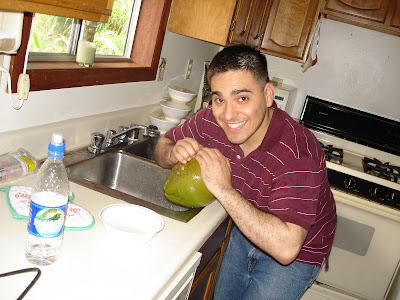 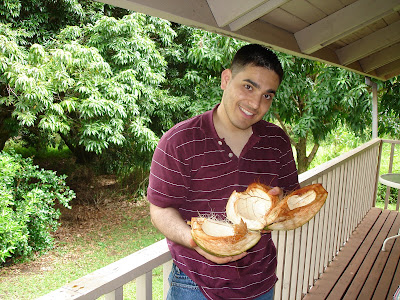 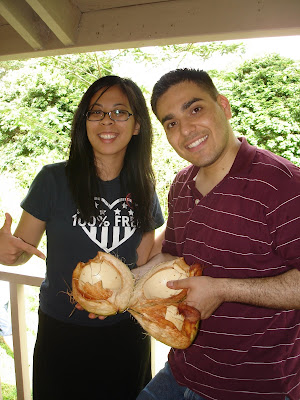 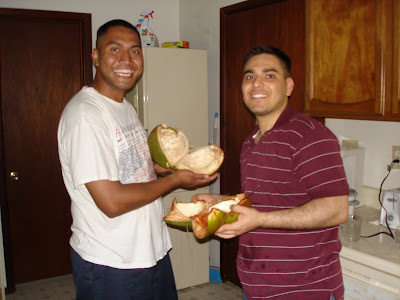 We wanted to get some groceries for our meals we would cook throughout the week - but before we left we drove around to explore. We ended up around the staff housing. We knew that one of our friends Chrstine was a teacher at the Elementary and her husband, Brandon, was a friend of Tuti & Marcello. Low and behold the last house at the end of the road ended up being their's! Tuti thought she saw Brandon poke his head out & Steve had a feeling that the truck might've been their's. So we get out of the car and check it out. We had a nice visit with them and admired their wonderful backyard. They had such awesome views of the mountains/valleys. After finding out that the guys were knocking down some coconuts he told us that there were some more trees by the pond - so of course before going to the market we stopped by the pond! 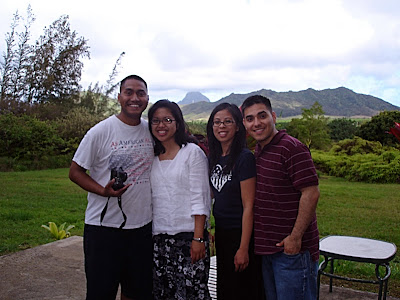 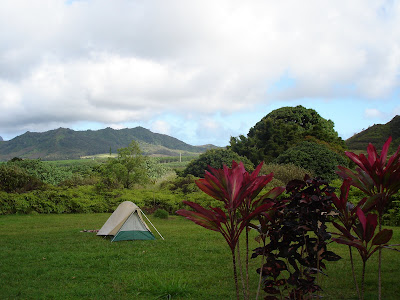 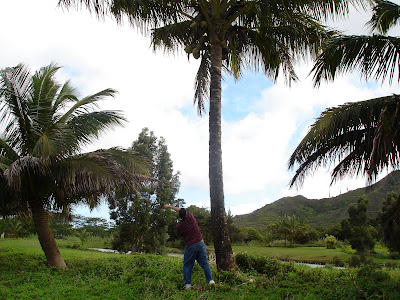 Hilo Hatie (a retail source of Hawaiian and Island Lifestyle products), Walmart, the grocery store were the stops we made. Surprisingly the market had lots of vegan options like: tofutti cream cheese, soy milk, soy icecream, & vege meat products.

After a dinner of chicketts, rice, & other goodies we went to bed looking forward to a fun-filled day of SCUBA Diving!!!