It rained last night - but we woke up to a beautiful sunny morning.
Breakfast was vege sausage links, bagels w/ tofutti cream cheese, cereal, hashbrowns, and this so yummy vege chicken porridge that Tuti brought.

Today was our Scuba diving day with Seasport Divers. We were all looking forward to this venture. Tuti even though she's not certified yet went scuba diving up to 30 feet. We were so proud of her - a non-swimmer went diving! Clothed in our rashguards we geared up our soft gear and headed toward Poipu.

Since we had a bit of time before Marcello & Tuti's pool session we went to the Spouting Horn. 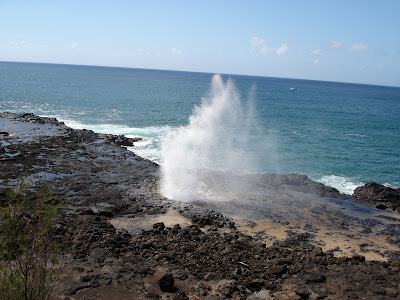 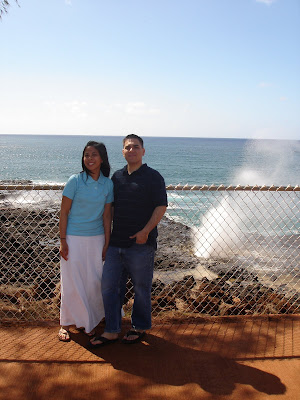 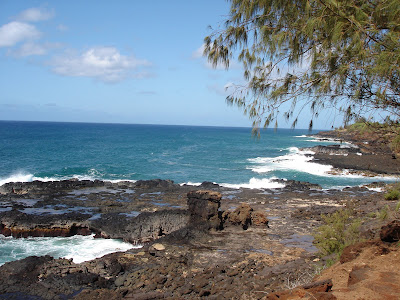 "On Kauai's south shore is the spectacular Spouting Horn. The Poipu surf channels into a natural lava tube here and releases a spout of water up to 50 feet high. You'll also hear a hiss and an eerie groan" before it spouts up. (gohawaii.com)


We souvenir shopped a bit and as we were on our way to Seasport Divers we stopped by a little beach where a Hawaiian Monk Seal was on the beach sunning itself. We took a few pictures. The waves kept hitting its head - I guess it was annoyed because it finally moved further up the beach. 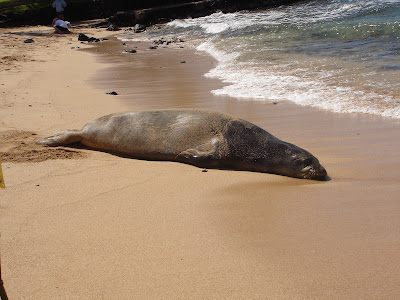 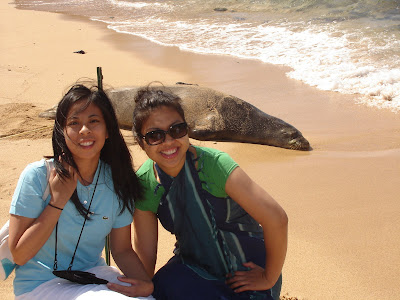 "The HMS is the most endangered marine mammal located entirely within U.S. waters. There is 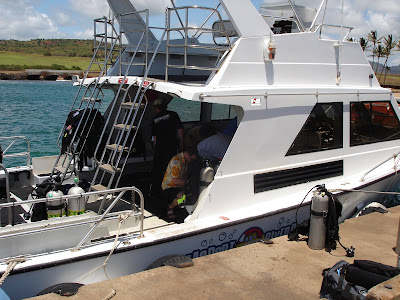 12:45 pm - we gear up in our 3mm wetsuits (vs. 7mm for diving in So.Cal.), hop into the vans and head for the boat. There were 3 groups diving. 2 groups of certified divers and 1 group of non-certified divers. We dove 2 times with depths between 40-60 feet (for certified divers).

The dives were so great, but the boat ride was awful. It was great being in the water - the waves were just too much. To put it nicely, a lot of people's breakfast did not stay in our stomachs.

However, the diving experience we walked away with was so surreal!

This was the best dive out of the two. We went through these old lava tubes - the almost had the feel of going through a cave. We had to be careful not to hit our heads! Here we saw hawaiian green turtles (which are protected and even against the law to touch it!) The turtles were so big! Adults of this species commonly reach 100 cm in carapace length and 150 kg in mass. (turtles.org)

In both dives, we saw many fish and coral life. Some fish that we saw are endemic - meaning they can only be found in hawaiian waters. We even saw an octopus that was hidden in the rocks - protecting her eggs. Looking at everything was pretty cool. One thing I want to work on is being able to ID the fish right away and maybe know some tidbits - I think I'd be able to appreciate it even more.

One word to describe our diving experience: SURREAL!

Descending and equalizing our ears were so much better. Richard (our scuba diving instructor in Cali) explained that we were probably less sick and warmer water allows you to relax in general & relax your muscles - which makes equalizing a lot easier. We had about 50 feet of visibility - and I totally felt like I was dreaming. Seeing everyone diving and exploring, looking at the sea life & creatures - was simply amazing. I could hardly believe that I was surrounded by God's creation - the creatures that most people don't usually get to see first-hand.

It was simply an AMAZING and AWESOME experience.

The DVD of our dives was very nice. It highlighted us diving off the boat, the sea creatures we saw, going through the lava tubes, etc. We're working on getting it formatted so we can view it on this blog. But don't worry it's coming soon!

http://www.seasportdivers.com/ForbiddenIsland.php) Yes, sharks! We have this DVD of highlights from dives off of Ni'hau and in one seen the divers were surrounded by say 20+ sharks!

After cleaning up and napping a bit we headed towards the eastern side of Kauai for some dinner to celebrate Shy's birthday and a beautiful day of Scuba diving.

The east side of Kauai is also called the Coconut Coast for the many coconut trees that grow there. We took a wrong turn for our restaurant and ended up at the beach where we saw, guess what, coconut trees! The inquisitive Steven of course wanted some coconuts! We didn't know if the property we were on was public or private so he went asking around. Steve found this couple who take care of one of the properties and the man was so kind to get some coconuts for us. The juice was even sweeter, the meat wasn't soft like the buko in the PI. The texture was like the grated coconuts we buy in the stores. So yummy! 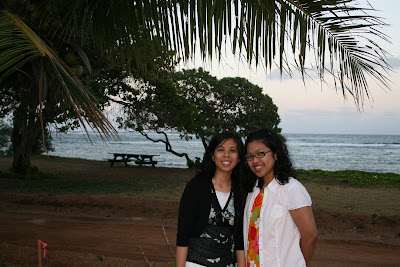 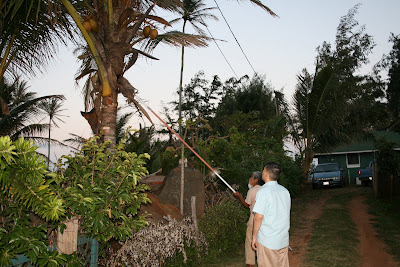 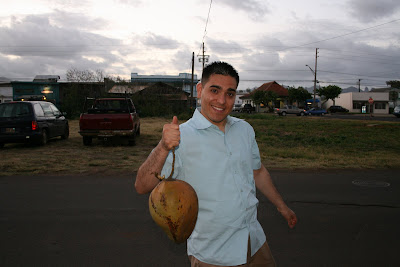 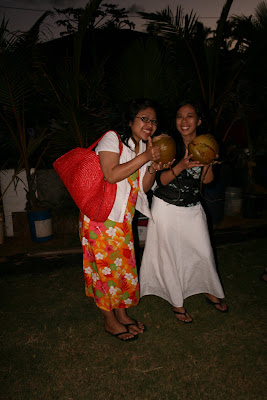 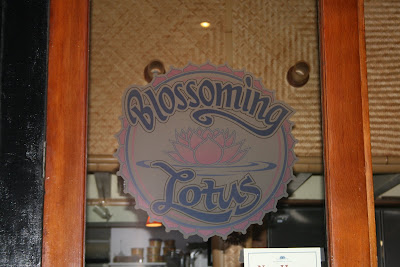 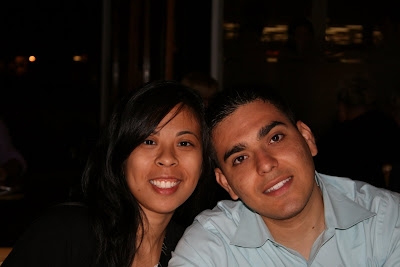 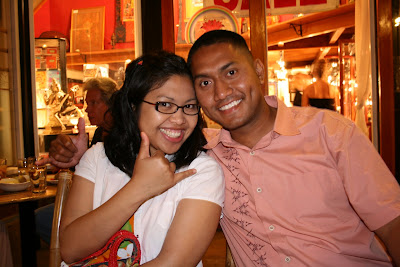 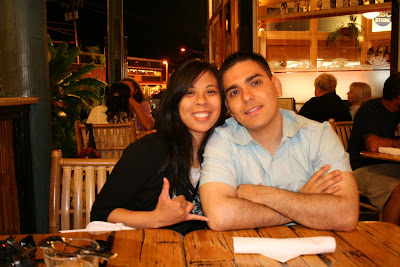 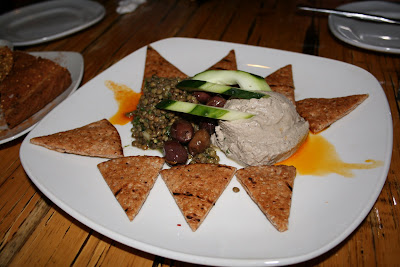 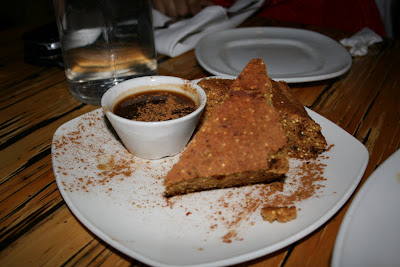 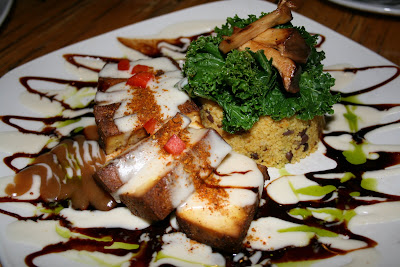 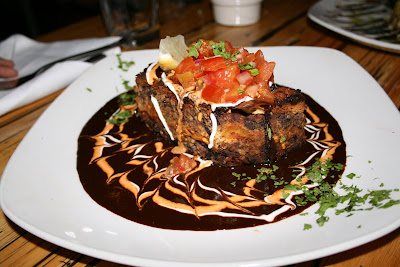 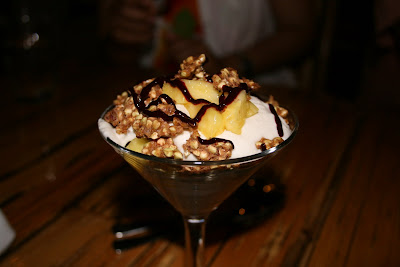 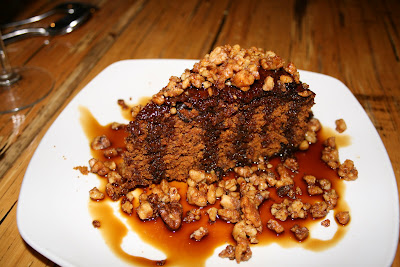 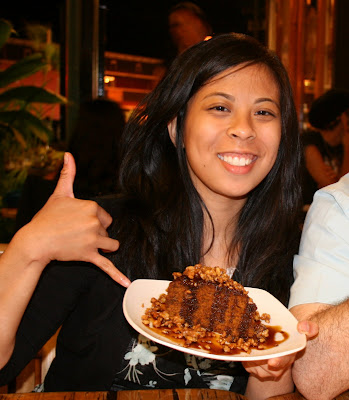 What a wonderful, fun, and blessed day!!